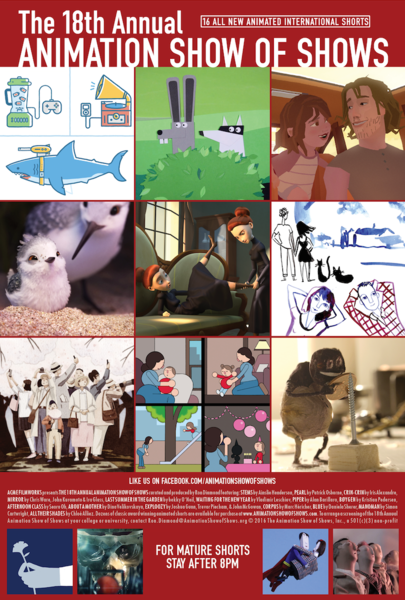 We recently discovered that we might be kind of a big deal. Why? Well, it turns out that our “explainer video” for Exploozy, a fake startup that we invented out of whole cloth, has been selected for inclusion in the 18th Annual Animation Show of Shows. If you haven’t heard of it, The Animation Show of Shows is a feature-length compilation of the year’s best animation, curated by animation industry luminary and all-around great guy, Ron Diamond. Ron reached out to us after seeing that Exploozy was selected for screening at the Ottawa International Film Festival. Ron’s selections often go on to win big awards, including The Oscars.

Exploozy is in some very impressive company this year. See the full list of films in this year’s edition. Many are from award-winning directors and animators that we admire and, well, maybe even worship. We’re extremely honored to be keeping this kind of company, and we never imagined that a little side project would turn into something that’s being recognized as an artistic achievement. Honestly, we were just looking to give ourselves, and maybe a few other people, a good chuckle or two.

This year, The Animation Show of Shows will be screening at select theaters nationwide, with international screenings in the works, as well. Check out the schedule of screenings, which is growing all the time, and go see it in a city near you. I’ll be at the screenings in Gloucester, MA and Los Angeles.