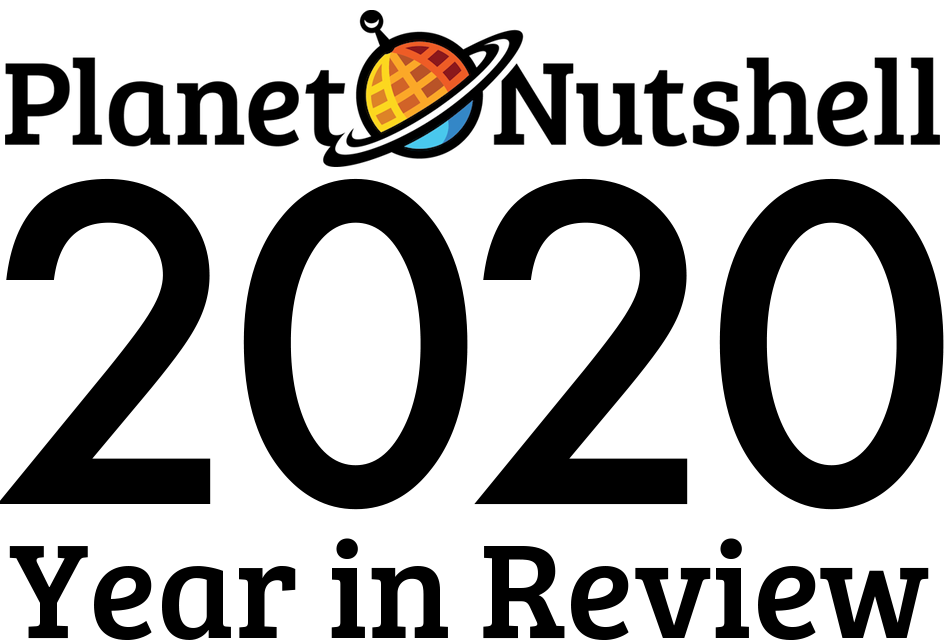 As you may now, 2020 was a… unique year, to say the least. But despite all the uncertainty and change, the Planet Nutshell team kept working away and completing projects for some stellar clients. So before we depart for our much-deserved holiday break, we wanted to share some personal highlights (ordered by production date) to commemorate this particularly wild ride around the sun.

You can 3D print all kinds of things, but can you 3D print custom orthodontia? LightForce sure can. Check out this short video about LightForce Orthodontics and their quest to revolutionize braces.

What’s this? Live action from an animation studio?! You better believe it. Our neighbors Gentle Giant wanted a video that tells the story of a successful move, which was easy enough, considering they complete them every single day.

Artsville is an arts and humanities educational webseries we created and produced along with our good friends and PBS affiliate KET. And 2020, we brought it back for a second season. While we love all the episodes from this year, we particularly the Vocal Parts episode, which contains an original bluegrass ditty (a collaboration between ourselves, and amazing composer, and some wonderful performers). Look for even more Artsville in 2021!

We love how our friends at Shriners challenge us to try new things with each project, and the Christmas in July video was no different. We loved giving their beloved spokesperson an (animated) cameo.

UETN: We’re Here for You

While this year was filled with requests for content related to the COVID-19 crisis, we gotta say, this spot for our friends for UETN was among the very best.

Wait… have you not heard about Azúcar yet? Where have you been?! Azúcar is Planet Nutshell’s first original short film, and while it actually won’t be premiering until Spring 2021, 2020 was the year we all decided it was time to make this dream a reality.

All right… I will admit that I think I saved the best for last. This spot from UETN wishes everyone hope and connection this holiday season, which is exactly what I wish for all of you reading.

And I know, I say this every year, but that’s because it’s true: None of these projects could have been done without the incredible talent of our in-house production team, as well as our freelancers. Here are all the people and production houses who helped make our biggest year yet possible:

When it comes to crafting a compelling story, it’s easy to focus on the words — what are we saying to deliver this message effectively? But being in the animation business, we know what’s being seen is just as important as what’s being said, and choosing the right illustration style is a crucial part of every production here at Planet Nutshell.

Here are a few questions we ask ourselves and our clients to make sure we always land on the right one:

1. What existing brand elements can we work with?

If clients come to us with an existing brand (think: logo, brand colors, etc.) we definitely want to use that as a starting point so our work can exist harmoniously alongside any other creative work that may have been done.

Sometimes, though, our clients aren’t quite there yet. And that’s no problem! We can help anyone find the right visual language for their video. Firstly, we think about the type of marketing we’re being asked to do and the audience we’re looking to connect with: B2B vs consumers, industry experts vs everyday folks. From there, we move on to:

2. What is the subject matter, and what’s the tone?

General design and illustration style are often dictated by what we’re talking about and what we want people to feel.

If we’re talking about a life science company’s latest drug discovery platform and want to evoke a high-end feel, we may opt for a general design that’s sleek, minimal and modern. If we are explaining something that can’t actually be seen — like the infrastructure of an IT network — we may opt for a design style that’s more abstract. And if we are hoping to get kids excited about learning, we might skew the overall design more whimsical.

3. How much (or how little) character is appropriate?

Most stories are about people, and people connect with other people. Meaning character design plays a huge role in helping your audience connect with your overall message. And while illustration style informs character design, it doesn’t decide it outright. There are still a few details to parse out.

But what if you don’t want your audience to focus on the characters but on other elements within the scene? What if you’re one of those stories that isn’t about people, necessarily, but about the larger environment or a scientific process? In those instances, we consider how emotive we want our characters to be. Do they express a little or a lot? And how does each enhance or detract from our overall message?

Colors can be used to convey all kinds of nuanced emotions. Red can convey anger or passion. Orange is often associated with fun. Yellow can depict illness or caution. Blue can mean calm or sadness.

But that’s just scratching the surface. The same colors can feel different depending on the hue or the saturation level. For example, if everything is bright and super saturated, the piece has a super energetic, juvenile feel. But if you mute those same colors, the piece suddenly feels more subdued and mature.

But that’s STILL not all. Color tones can play a huge role as well! Cooler tones tend to feel sleek, modern, and in some cases, sterile (which may or may not be a good thing). Warmer tones skew a bit more cozy and sincere.

While illustration is a lot of fun, it’s certainly not all fun and games. At Planet Nutshell, we take it very seriously because we know, when done right, it is one of the most effective storytelling tools there is.

We love it when our friends at WGBH, the local PBS station, come to us with a project, and their latest was a doozy… in the best way possible. They asked us to help them localize 60 (as in 6-0) short science videos to Spanish.

What is localization? It’s when you dub, subtitle, and reanimate the onscreen text of an existing video into another language. It was a big job, to say the least, but as always, we were up for the challenge, especially since it meant we not only got to work with WGBH, but with NASA(!), who is funding this initiative as part of the Bringing the Universe to America’s Classrooms program. Plus we got to brush up on our Spanish while learning some really cool science. We call that a win-win-win-win.

With so many videos to keep track of, we knew the key to success would be setting up a clever production pipeline right from the jump. Here’s how we did it:

The client provided us with time-coded scripts for all of the episodes in English. We then filled in the corresponding Spanish. This process depended on the commenting feature in Google Docs so everyone could weigh in on the edits and approvals.

The second step, recording the new Spanish voiceover, actually was made of several sub-steps. Firstly, casting the right voice. Or rather, the right voices, seeing as we had to cast for over 100 voice parts across the 60 videos. Luckily, a talented group of 10 voice actors were able to read for all 100 parts. Next came the actual recording. Since we are still in the midst of the COVID-19 pandemic, we made sure to cast talent that has their own home recording studios. We edited the voiceovers in Premiere, roughly timing them out with the videos with the English voiceovers as a guide. After that, we uploaded the voiceovers to Vimeo Review so the client could make timecode specific notes and request voiceover pickups. Once the client approved the pickups, we could move onto editing.

Armed with a time-coded list of English text on screen in English as well as its Spanish translation, we opened up the footage in After Effects to mask and replace that English text with Spanish. To accomplish this required a lot of creative problem solving, figuring out the best ways to match existing texts, fonts, movements, colors and textures. Thanks to the wonder that is Adobe, our After Effects files linked directly back into Premiere for a seamless import of new Spanish graphics over the existing video.

We exported the full videos (with the brand-new, totally synced Spanish voiceover… and music… and sound effects… and shiny new Spanish text-on-screen… ) and posted to Vimeo Review so the client could again provide timecode specific notes. Then we made any necessary changes and locked the video!

To ensure accessibility for all students, we used the final scripts and final videos to create the subtitle and caption files. We quality checked them in VLC and sent them along for client approval.

It took 6 months of hard and careful work, but we were able to provide the Client with the final videos localized to Spanish, along with the subtitle and caption files. And of course, the PN team (remotely) celebrated a job well done.

Here is one of our favorites, Himalayan Earthquake: Future Earthquake Potential. Just click on the link and it will bring you to the PBS Learning Media page. Toggle from English to Spanish and enjoy!

We’re happy to welcome our fall intern to the team and are excited to have him on our planet. We can’t wait to see what he creates!

Hi! My name is Sean Harman and I am a recent graduate of Ringling College of Art and Design with a BFA in Motion Design. I enjoy creating 3D and 2D animations with Cinema 4D and After Effects. Besides design I also enjoy art history, record collecting, cooking, and anything related to the ocean. When I am not in the studio or in font of my computer you can find me training for half marathons, sailing, or dancing.

We’ve spent the better part of the summer putting the finishing touches on the film. We’re on track to submit it to the festival circuit in the fall, and with any luck you’ll be able to see it at a film festival near you very soon. Stay tuned; we’ll have more updates as we near completion about where you can see the film.

Today we’re releasing a new trailer with never-before-seen footage and a few more hints about the story arc. Enjoy!

Frankly, we’ve been waiting for today for a long time. Because today is the day we finally get to reveal a project we’ve been working on for months — Azúcar. Azúcar is the story of a mother and son searching for a better life. They have traveled over 1500 miles from Honduras to the US border, and tonight, they attempt to cross the Rio Grande… and find nothing goes as they had planned.

Azúcar is our first narrative short film, and rest assured, we will have plenty more to share before its planned release in Winter 2021. For now, though, please enjoy this first look, along with some words and insights from the production team.