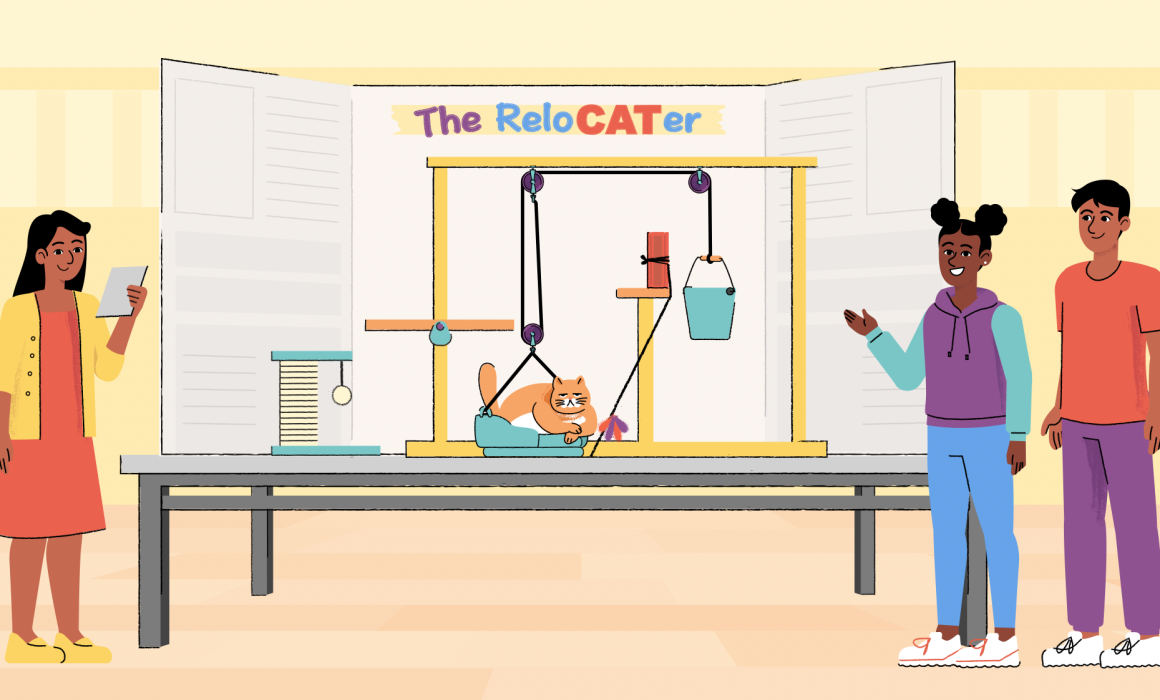 When the folks at WGBH (our local PBS station here in Boston) approached us to make animations for their Design Squad Latinx series teaching middle school students about engineering, we were excited to hop on board! We made two animations for them: What Is A Pulley? and Super Successful Showcasing, both in English and in Spanish, and in the process we learned some engineering! That’s a win win! Here is a behind-the-scenes look at our process for these bilingual productions.

For the Pulley episode we needed to truly understand how pulleys work by changing the direction of a force and how a 2-pulley system cuts the effort you pull in half (yay physics!) and then figure out a scenario that utilized a pulley in a fun and accessible way– what better than delivering burgers and drinks to friends!

For the Showcasing episode the biggest challenge was engineering the ReloCATer machine. We tried to integrate as many simple machine concepts as we could including the pulley, lever, inclined plane, etc. We took inspiration from Rube Goldberg machines, such as the Archimedean Excogitation, a 1987 audiokinetic rolling ball sculpture by George Rhoads at the Museum of Science Boston, and Wallace and Gromit’s inventions like this handy one to turn on the TV. Once we figured out how to combine simple machines to relocate a cat, the ReloCATer was born!

Since the Client provided the scripts we were able to dive right into storyboarding. A major consideration was going back and forth between “explainer space” (where we used graph paper backgrounds and simpler drawings) and “real life space” with characters and backgrounds in full color.

Next it was time to decide on a look. We presented them with a few options from our past work and we ended up settling on a direction that was fairly realistic in terms of character and world design.

Next we got to work implementing the approved moodboard look in our full designs. Here are some of our favorites. Please note that we do not recommend using the ReloCATer with your guinea pig.

The final step was adding sound design, music and voiceover and these two spots were ready to inspire future engineers everywhere!

Then we began the task of translating both episodes into Spanish. We translated the script, recorded the new voiceover, re-timed the episodes and updated the on-screen text to Spanish. And voila! (Or, in Spanish, ¡Listo!)

Can’t get enough Design Squad Latinx? Head on over to PBS LearningMedia.