Yana and Egbert is here! We produced the first five episodes of this adorable series in collaboration with professor Laura Schulz, who heads up the Early Childhood Cognition Lab at MIT. Designed to teach preschool- and early-elementary-aged kids how to think and reason like scientists, Yana & Egbert began as bedtime stories Dr. Schulz once told to her daughter. Thanks to our amazing partnership with her and her team, they’re ready for all to enjoy.

A gaggle of arguing aardvarks, some not-so-sneaky zebras, and a smarty-pants ostrich named Izzie. These are just some of the creatures Yana and Egbert meet on their adventures. The series was our most complex project to date. We called on multiple voice talents and a deep roster of artists, animators, and sound designers to produce these episodes.

Each 3- to 4-minute episode begins in live-action with Yana playing at home, helping her mom at the store, or watching her dad cook. Yana’s curiosity soon leads her into a cartoon world, where she, Egbert the hippo, and their animal friends use scientific thinking as they explore imaginary worlds.

You can watch the first five episodes right now at Preschool Pioneer. They’re also airing daily on KUEN TV in Salt Lake City to coincide with the National Association for Education of Young Children’s Week of the Young Child. A huge thanks goes out to our longtime friends at the Utah Education Network for airing the show and hosting the episodes along with supplemental materials for teachers and parents. They worked very hard to bring Yana & Egbert to their audience. 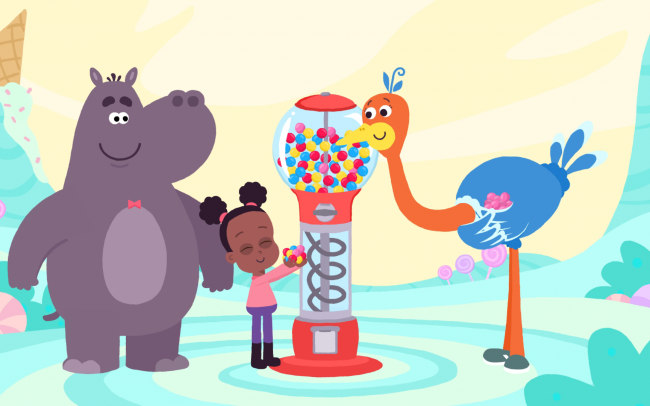