Dublin-based Pulseway makes a snazzy mobile app that gives IT pros power over all their systems, no matter where they roam. Pulseway came to us with a very focused mission: Synthesize all the features and benefits of the app into a short, fun, and enticing explainer that moves people to take action and try the product. Before I explain the process, I’ll share some client feedback we received from Edgar Zacharjev, Pulseway’s head of digital marketing.

Working with Planet Nutshell was an absolute breeze; every part of the process was extremely smooth. Planet Nutshell allowed for numerous changes but we didn’t have to use them, as Joshua really took in the brief we sent him, he took time to understand our customers and the product. The end product was exactly what we wanted, everyone at the office loved the video. Would recommend Planet Nutshell highly, not only for the professionalism, but for their creativity and attention to detail.

Edgar was also kind enough to share some interesting statistics about their return on investment:

The video was a huge success, we use it at presentations and our partners use it worldwide as an introduction to the product. So far we have mustered up about 2,000 views.

We have seen our home page bounce rate improve by 4.3 percent after the video had been implemented. Thus simultaneously it has also improved our page sessions by 3.6 percent.

The great folks at Pulseway gave us lots of background information: They filled out our new client questionnaire and sent over white papers, as well as current and former marketing materials, including the inventive comic below. I liked the impulse to use a superhero theme, but I was a little concerned that it’s something audiences see a bit too often. As the process developed, we moved to a subtler presentation that was a bit fresher but still captured the notion of the heroic IT specialist. 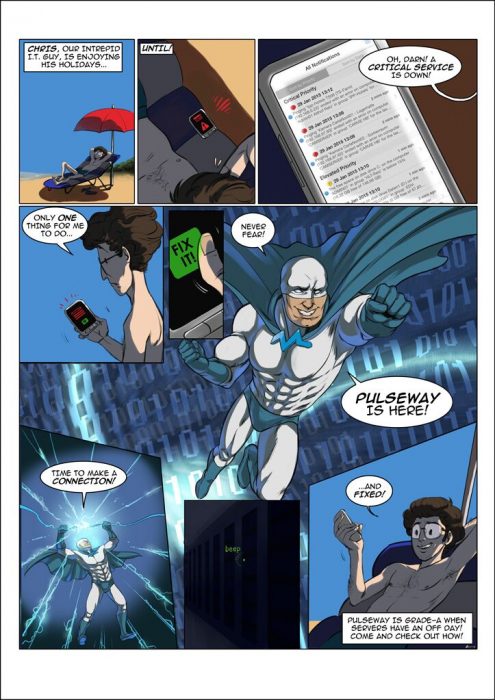 The script for this project moved really quickly; three revisions and we were all set. The final word count was 106, which is right on target for a 45-second video (150 words equals one minute). The goal with this one was to quickly introduce the product concept in paragraph one, then shift to a quick scenario that embodies a compelling use case for the product. Reassert the value proposition in paragraph three, and then say goodbye with a strong brand statement. Simple and concise; just the way we like it on Planet Nutshell. 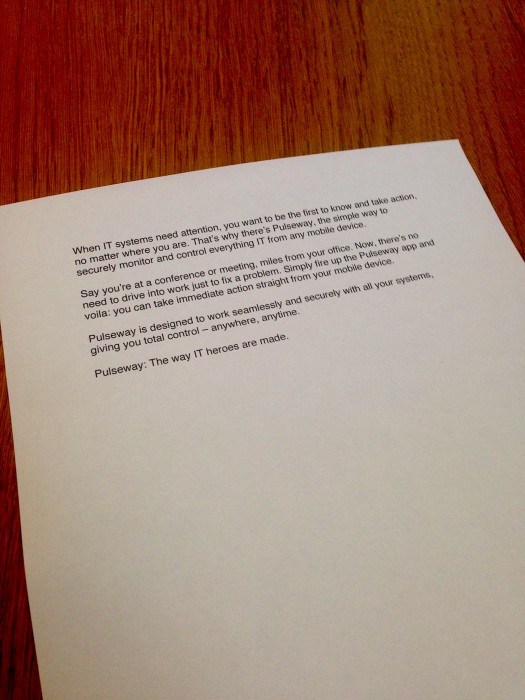 As you’ll see, the storyboard didn’t reflect the final design of the video at all. The look and feel of our IT hero protagonist didn’t take shape until later. What this storyboard does represent, however, is our meticulous attention to detail; nearly every word of the script has a corresponding frame. This gives clients (and us!) a very clear view of the timing and action. 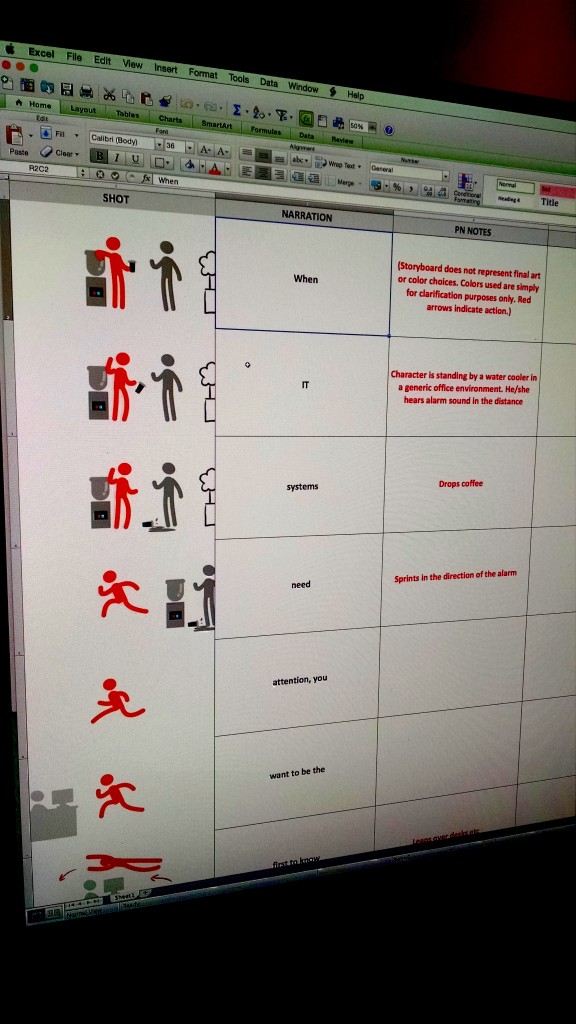 Now we got to have some fun with character concepts and style. The “hero” has superhuman proportions, but he’s also accessible and human. We also aimed to harmonize with the Pulseway brand colors while delivering a style that was fresh and relevant to audiences in the tech industry. Here’s some artwork we later animated. Note that we changed the red color on the water cooler in the final animation, as it distracts the eye. Details matter! 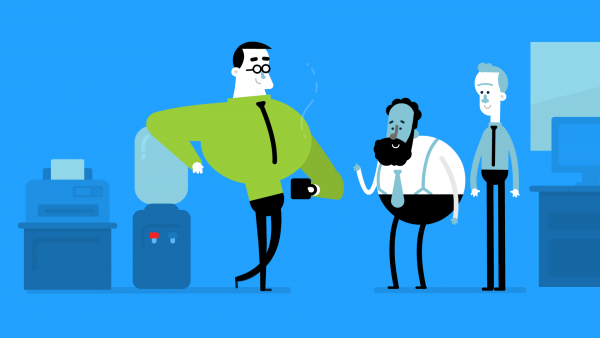 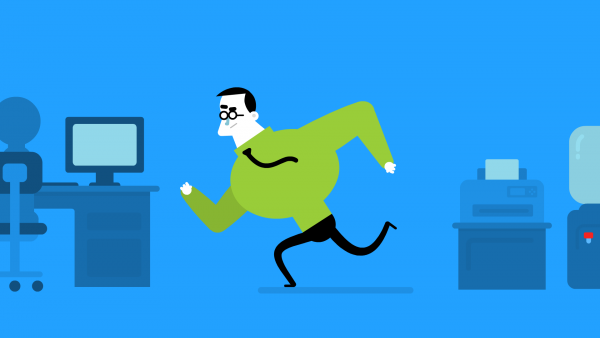 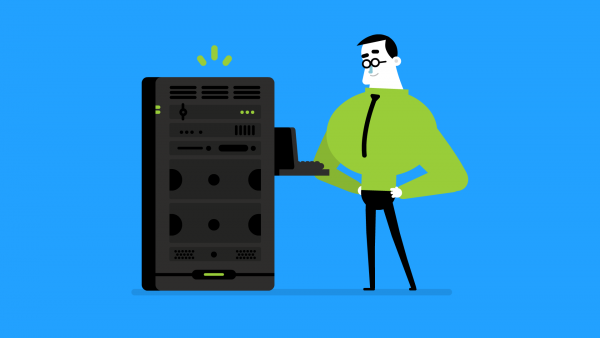 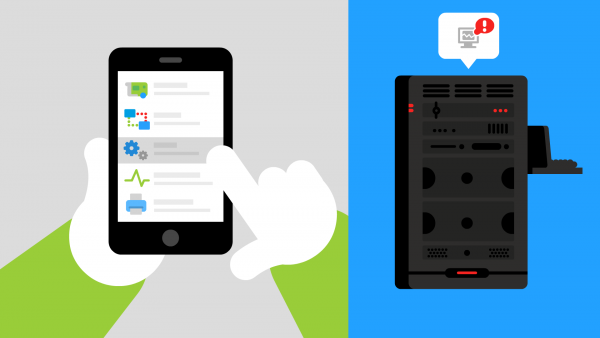 Once all the artwork was completed, we got down to animating. Here’s the final product:

Pulseway’s web site integrates the video quite nicely; the blue band just above the fold on the homepage draws the eye to the video link. The use of a lightbox for the video player is a nice choice, as it allows the viewer to exit the video and instantly re-engage with the page — and most importantly, the “Get Started Now” button. 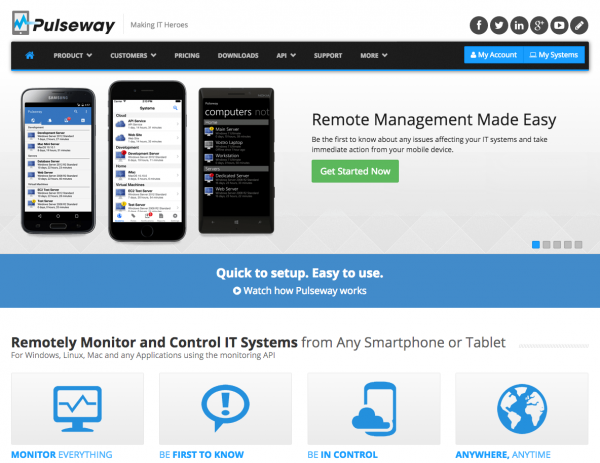 The Environmental Voter Project, a non-profit that’s working to increase voter turnout among environmentalists, asked us to explain why their work is so important. The video was deployed as part of the EVP crowdfunding campaign, which is seeking $400,000 by September 2015. Learn more about this project in our case study.

Meet Lily. She cares deeply about the planet her kids will inherit, and she knows that climate change and other environmental problems are only getting worse.

So, Lily does what she can. She recycles. She bikes to work, even in winter.

But there’s one thing Lily doesn’t do that could have the biggest impact of all. Lily doesn’t vote. And she’s not alone. The latest research reveals that most people who really care about the environment–as many as 15 million environmentalists–simply don’t vote.

Even worse, political campaigns never even encourage people like Lily to vote because it’s more efficient to just reach out to reliable voters.

The end result: When Lily and the 15 million environmentalists like her don’t vote, their concerns don’t show up in polls, and so politicians ignore them.

We have to change this, for Lily and her family, for you and your family, and for the planet. That’s where the Environmental Voter Project comes in. We’re not a campaign, and we don’t even care who gets elected. We’re a non-partisan, non-profit organization with a simple mission: Get more environmentalists to vote in each and every election.

First, we’ll use state-of-the-art data analytics to precisely identify all the Lilys out there who deeply care about the environment, but are ignored by politicians. Then, we’ll connect with them–knocking on doors, using social media, and sending mailings–all with special messages scientifically proven to increase their likelihood of voting.

So what’s next? Well, that depends on you. Our top-notch team is ready to go. We know we can succeed, but to get started we need your donation. And we need it today, because if we don’t meet our goal in time, we don’t get to keep any of the money we raise. So please contribute to the Environmental Voter Project. Your support will give Lily and millions like her a voice, a voice that just might save the planet.

Our longtime client, Foundation Medicine, asked us to create a video that would be presented in their booth at ASCO, the world’s largest clinical oncology conference, as well as on Foundation Medicine’s homepage. Learn more about this project in our case study.

To decode the language of cancer,

to understand everything it’s saying,

you have to look deeper.

You have to look for more

to uncover what others can’t find.

with the most comprehensive genomic profiles available:

We search the entire coding region

of every clinically relevant cancer gene,

to identify all four classes of genomic alterations:

Rearrangements, such as gene fusions

A test that looks deeper,

A test that reveals up to 3x targeted therapy options

and supported by an expert team of oncologists, pathologists, and PhDs

is only the beginning.

You want the best for the patients you care for.

We empower you with:

Connects you with peers who have treated similar patients.

Brings precision cancer care to every patient, regardless of financial situation,

removes the burden of access to targeted therapies and clinical trials from your care team.

From test to results to treatment,

to help you deliver the best possible patient care

Talk to a representative to learn more.

How does a Planet Nutshell video go from concept to a major biotech client’s homepage in about a month? We’ve had a relationship with Foundation Medicine for a few years now, so when they asked us to produce a video for both their homepage and their booth at the largest clinical oncology conference in the world, they knew we were up to the task.

Because we knew this video would be presented in a trade show setting, we wanted to create an experience that would draw passersby into Foundation Medicine’s booth. We assumed the environment would be noisy, so it needed to work without audio and it needed to get people to stop and take notice.

The race was on to get this project wrapped up in time for ASCO 2015.

Because we had to get this wrapped up in a week, I jotted down a few notes at an on-site meeting with the client. To streamline things even further, the final script was integrated directly into the storyboard for final approval. 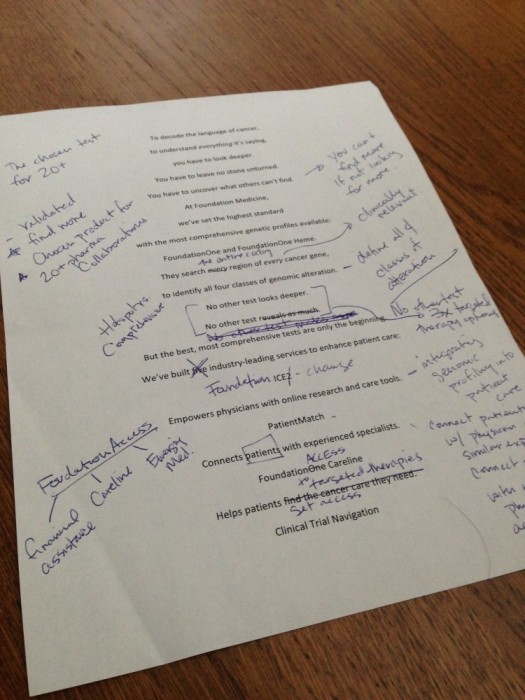 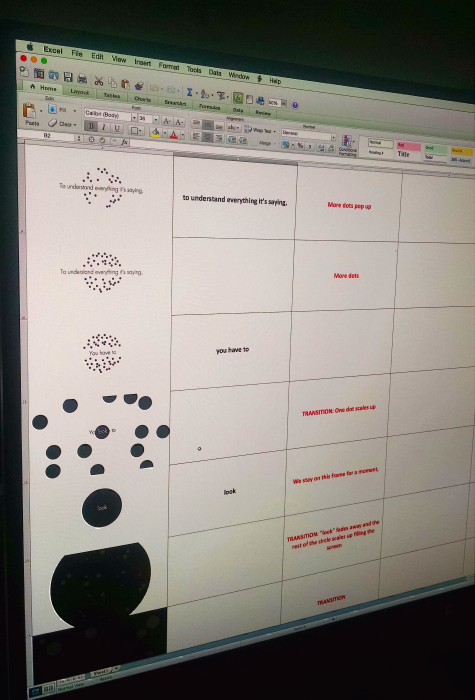 We burned some serious midnight oil to make the deadline for this one. When we were done, the final product really impressed the client. I’d use the term ecstatic, actually.

Foundation Medicine’s VP of marketing texted me this photo from the ASCO show floor, adding “The video looked great!!” 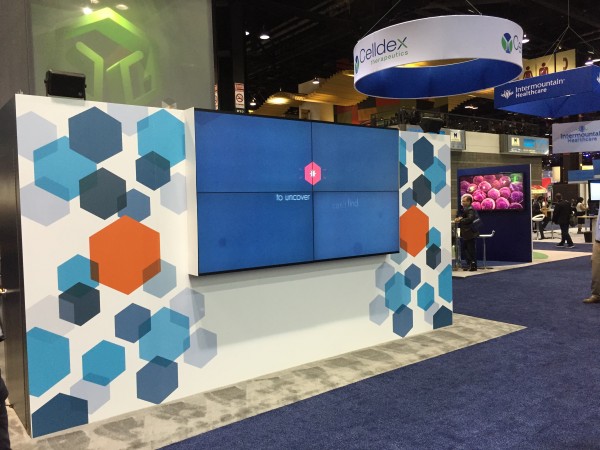 Shortly after the show, the video went live on Foundation Medicine’s homepage. I love how they integrated it into the homepage slider. 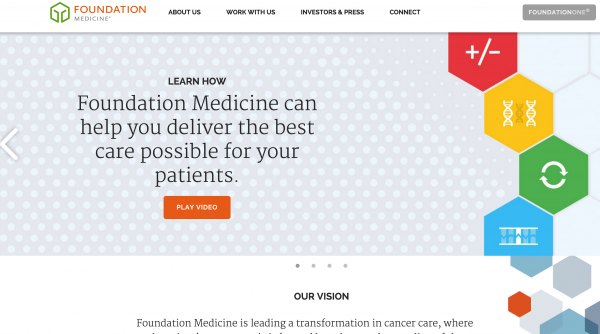 Every once in a while, the planets align and wonderful things happen. I knew we were getting involved with something special when Nathaniel Stinnett, a leader in political campaign organization and environmental policy, asked us to create a video to support the crowdfunding launch of his brainchild, the Environmental Voter Project.

It shocked us to learn that, statistically speaking, the vast majority of people who care about the environment don’t vote. The reasons for this are complex and varied but, as we learned, somewhat beside the point. EVP’s goal isn’t to advocate for any environmental cause or to even raise awareness about environmental issues. Instead, EVP’s core mission is to get more environmentalists to vote. Who they vote for — Republicans, Democrats, Green Party, etc. — isn’t important. All that matters is that they show up at the voting booth.

Why, you might ask, is that simple mission so important? Shouldn’t we be concerned with encouraging people to vote for the right people and causes? Explaining the answer to those questions was the challenge Nathaniel entrusted to us.

I started by sitting down with Nathaniel and listening to his vision and goals for EVP. He also presented us with an extensive business plan, a detailed pitch deck, and an early, 933-word script and visual outline for the video. My goal was to synthesize all of this into an accessible story, so I encouraged Nathaniel to consider allowing us to profile a single character with universal characteristics. And thus our heroine, Lily, was born. 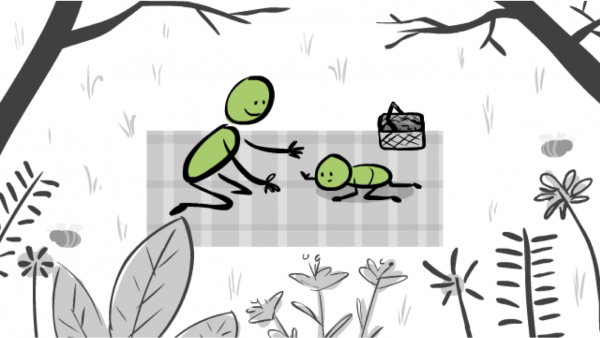 We completed the script after a lot of thoughtful input from Nathaniel, and agreed that the third revision was the one to go with. 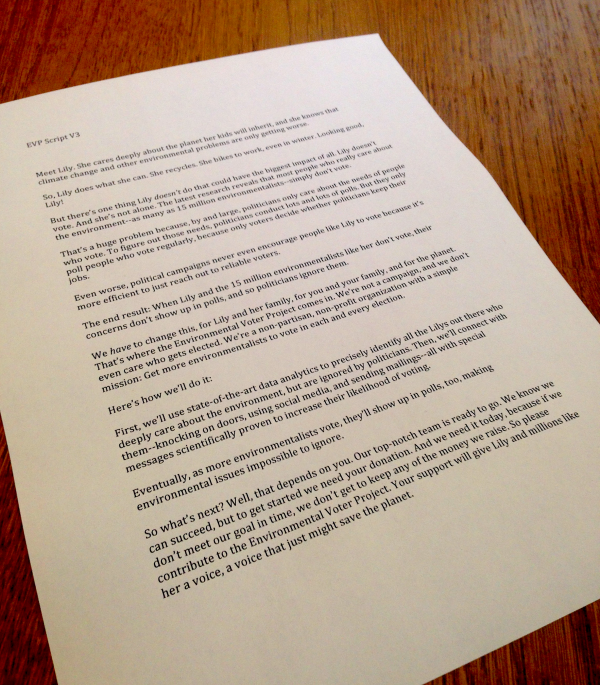 Here’s are the first few panels from the storyboard. The final storyboard contained 123 panels. 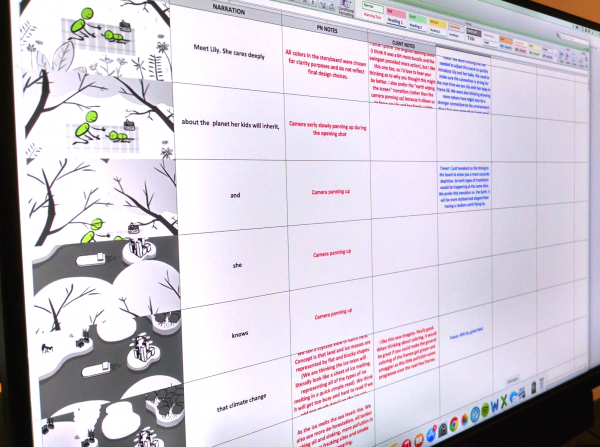 After a generating a few options, we settled on a style that felt right for the EVP brand and audience. The style has a handcrafted feel but retains a sense of polish and professionalism. 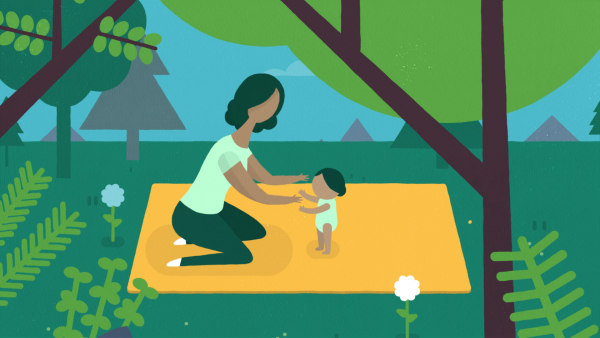 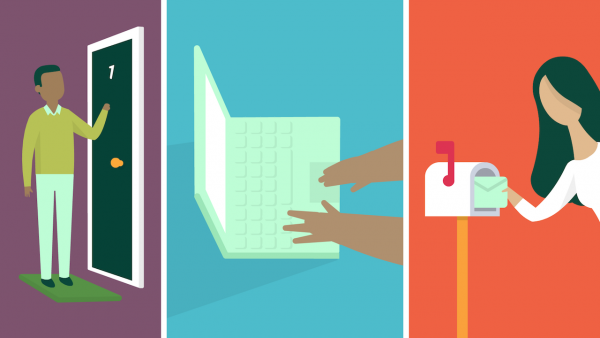 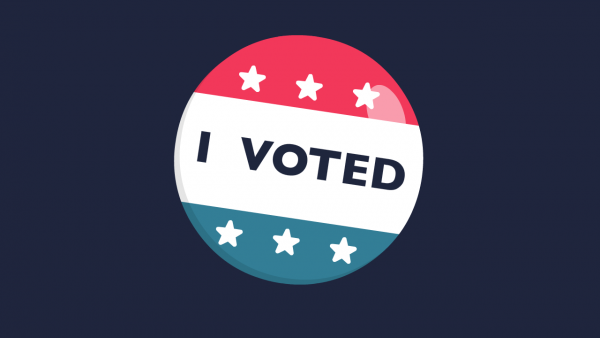 After three weeks of putting our heads down and cranking out the animation the final product was done.

A week after the video was completed, the campaign went live on wedid.it. The video is front and center on the donation page, helping visitors quickly understand what EVP is all about and why their donation will make a difference. As I write this, 11 days after the launch, the campaign has cleared $100,000. Not bad! 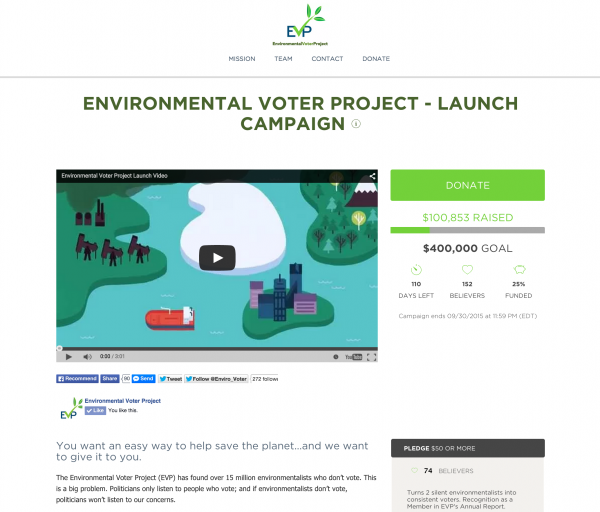